5 months, 1 designer, 1 PM and 3 software engineers, all seniors in college.

TempoRun is like a music player, but it sorts your songs by their tempo. The App rates your songs on a scale of 1 to 10. Level one is a slow walking pace, five brings you to a jog, and 10 sets your at a sprint. Here is a promotional video showing you how TempoRun improves running experience.

It is important to understand how users interact with their devices and what they would go through during their run. Those insights helped me identify the pain-points.

TempoRun will automatically categorize songs in user's music library into levels 1 to 10 based on their tempo.

A clean and easy to use interface to manage songs and speed.

3. Keep track of stats and performance

Get an at-a-glance view of user's progress, and keep track of training history. 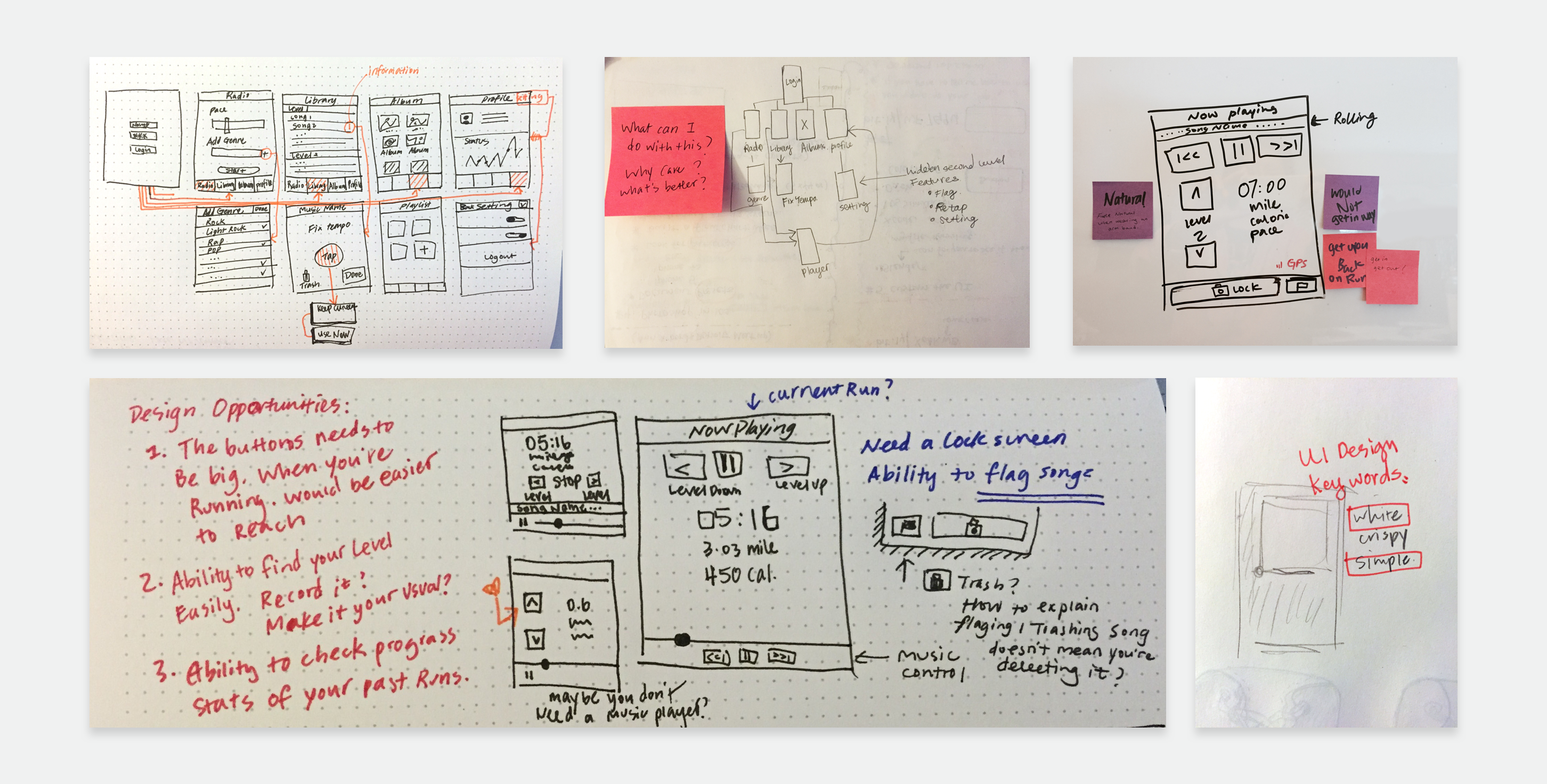 TempoRun 1.0 was designed for iOS 6, now two and half years has gone by, I decided to update the UI with the new iOS design language.

In the TempoRun music library, all the songs in your iPhone are rated and sorted by levels. For the iOS 8.0 redesign, I added a new feature which allows the users to create their own playlist. The playlist could contain songs rated the same or different levels. With this feature, users can now create interval training with their favorite songs.

Right now, I’m researching voice command and haptic feedback for my graduate studies. New technologies like Siri opens opportunities for controlling the music player. With these, the new version of TempoRun music player is “smarter” and more dynamic. For example, user could voice-command TempoRun to change levels or skip a song, and TempoRun could response using audio feedback.

Another insight I learned from researching fitness trackers is that users need just-in-time feedback and actionable insights. Therefore, instead of showing user all the data, analyze the data and generate insights users actually care about. Habit formation is another important consideration here. How do we present these insights and help users improve?

TempoRun ensures that you’re getting the best songs each and every time you run. Let it become your new favorite training partner.

Since the release on May 2013, the responses were overwhelming and people love TempoRun. Here are what people said about TempoRun:

Though it’s light on features, TempoRun serves its purpose well and is an app you should consider for your next run." —By AJ Dellinger, Digital Trends

"TempoRun is rated best new iOS apps of May 2013. Run, don't walk, to download it." By FierceMobileIT

"Temporun, rated best App of the week, aims to change that for you. The app utilizes a unique system that categorizes your music based on tempo and matches songs to your running speed." By Digital Trends

The first release is just the beginning.

We all have a start-up dream. When Josh reached me and pitched the idea, I was thrilled! He might actually have a million-dollar idea! We worked long hours, juggling between jobs and school, all to prove that students can make great things.

Creating TempoRun was a great experience. Nothing can describe the feeling when we made the release date (2 days after final exam of our last semester in college) and the satisfaction of receiving positive reviews from people and online media.

Now two and half years have gone by and TempoRun 1.0 didn’t turn into TempoRun 2.0. I took the initiative of redesigning the interface and hopefully in the future, we can release a brand new version. After all, TempoRun is a brilliant idea.

Recently Spotify release “Spotify Running.” I was really excited that Spotify recognized the problem! Back in 2013, we decided to take out the Radio feature due to the slow performance of SoundCloud. If we have access to a larger music library and the ability to stream music for users, TempoRun will be able to provide user with more song options.